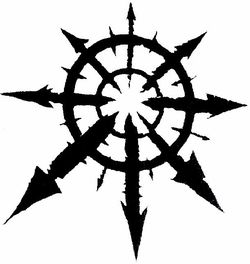 This is something that has always bothered me about GW's Chaos Pantheon, and reinforced even further by the most recent incarnation of the Chaos Daemon Codex. The particular bit that set me off this time was near the start: "Currently, Khorne is held as the mightiest of all, for the practice of murder and blood sacrifice stretches to the dark beginnings of the universe." Really? Murder predates fear or despair, or hope, or lust?

Murder - not just killing to eat or defend oneself, but intentional murder - requires a certain level of intelligence, to choose to kill for some reason beyond mere survival. Let alone blood sacrifice, which requires a level even beyond that, to conceive of beings beyond the material, who would desire such a thing as a sacrifice.

Fear, on the other hand, is a basic survival trait. Long before anything has evolved to a level of intelligence required to willfully murder, fear is there, protecting whatever is lower down on the food chain, signalling them to flee and survive.  Despair? Certainly even an animal far below the level capable of deliberate murder can know that it is sick or wounded unto death, and give up its will to live, curl up to die quietly alone in some hole.

Hope? Seriously? Anyone who's ever owned a cat or dog knows that animals are more than capable of hope, even before the invention of can openers, and they are certainly incapable of murder or blood sacrifice*. And not just the hope of something, but action taken to change their environment to satisfy that hope. Even something as simple as digging a burrow for warmth or a nest to shelter eggs strives to change the world in hope for the better.

Even lust emerges in species incapable of higher thought. Not just simple animal heat, but yes, actual lust. Not only primates, but also wolves, and even some birds, and more, have been documented engaging in non-reproductive sex. Other excesses too: It takes little intelligence to eat beyond capacity once a creature has experienced starvation. To greedily chase off others from food, even when there is more than enough. Given the chance, the resources to allow for leisure, any creature may fall to laziness and sloth.

Any species that has evolved to the level where its members can choose to murder will certainly have acquired at least some of these feelings long before. They are far more fundamental than murder or sacrifice, and would have imprinted on the empyrean aeons before the first killing that could truly be called a murder or blood sacrifice. Even in a species that has evolved so far, their young will almost always pass through stages where they are capable of some of these before they reach the point where they could murder, or even think of it. Even a baby can fear, or hunger beyond its needs.

But wait, there's more! Killing can power any of the four gods. Even in more evolved species, murder or battle, especially in the forms practiced by the followers and daemons of Khorne, are relatively inefficient ways to kill people. WWII was the deadliest conflict humanity has experienced thus far, killing something on the order of 3% of the world's population at the time, using means far faster than swords and axes, no matter how well imbued with warp power they might be. In comparison, even the lowest estimates of the black plague's toll have it an order of magnitude higher in a comparable period of time, and some estimates range up over 20% of the world's population getting wiped out by it in 7 years or so. Numbers from Slaaneshi causes, such as overdoses, overeating-related diseases like heart disease or diabetes, and so forth, are harder to find comprehensive numbers for, but easily outpace war deaths in the modern era. Even many of the war deaths could have viably fueled Tzeentch or Nurgle, with wars commonly started by the desire for power, or lashing out from unacknowledged, subconscious fear.

Let's take things up another level: GW constantly conflates our relatively minor galaxy with the universe as a whole. All the events and emotions of all the beings in our galaxy aren't even a drop in the ocean compared to those of the universe entire. Changes in the empyrean energy from any one galaxy are going to be nothing more than noise compared to the totals from the trillions of galaxies currently calculated to exist. Even the complete destruction of all life in one or more galaxies that has been theoretically ascribed to the Tyranids is no more than a rounding error. Need to give the GW guys some time in the Total Perspective Vortex.

Sorry about that. Like I said, it's been bugging me for literally years, and I finally just hit the point where I had to complain about it on the internet. Which might, itself, become seen as a fundamental feeling at some point, depending on how the future goes. Next time hopefully I'll have some models to show off or something otherwise less ranty. Until then, y'all have a good one, y'hear!

*This may be arguable in the case of some particular cats, but as a general statement, it holds ^_^
WestRider at 10:03 PM
Share