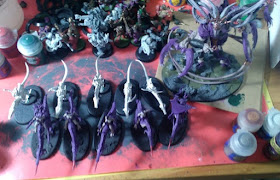 February, as usual, has been going slowly, but I have still been making progress. On the Squaduary front, I've actually had to trim down a bit, as the Fiends are just too much of a pain for me to deal with right now. Progress goes well on the Seekers, tho, with the older ones built and just needing some basing work, and the newer ones wanting some gold, a little touch up on the black and purple, and a wash, then some grass powder.

The Seekers are also my entry for Fembruary, as my Escher gang is rather too far along to count, and I don't have anyone else suitable on deck at the moment.

Last, but definitely not least, Azazel's February Hobby Challenge was to finish a Model that had been started at least 6 months ago, and I have decided to finally buckle down and finish up my Keeper of Secrets conversion, for better or for worse. As you can see, I've done the basecoats and a wash already, and since then I've been all nervous about screwing things up while highlighting.

Next week, I will hopefully have all of these done (for "modeling complete" values of done for the Diaz Seekers). Until then, y'all have a good one, y'hear!
WestRider at 2:29 PM
Share