Having learned from last year's issues, I'm doing something a little different for Squaduary this time around. The big issue that arose is that it's rare to get a day in February where I can spray prime Models. So, while I'm going to be building and painting 3 Fiends and 5 Seekers of Slaanesh, there are actually 16 Models involved, since the ones I'm painting are going to be some I built and primed during the summer, and the ones I'm building probably won't get primed and painted until sometime in March or April. Anyhow, here's the "before" pic: 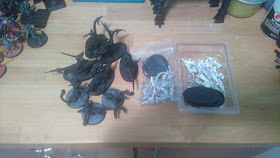 Because of this, I'm probably going to be getting a bit away from the standard Squaduary schedule, and, depending on how my motivation and inspiration go, may end up finishing the painting before the building. Until next time, y'all have a good one now, y'hear!